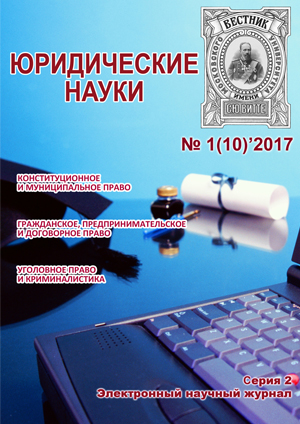 Annotation: The article is devoted consideration consideration of major trends modernization of law-making in the Russian Federation. The author gives some offers on current legislation improvement in this area

Annotation: The article: The article is devoted to the application of QR-code on the final protocols of PECs. It discusses the specifics of using this kind of data coding when compiling the final voting protocols of the PEC, the feasibility of this technical innovation in the work of election commissions of various levels. Using the analysis of the practice of organizing this data coding system in the conduct of elections in some constituent entities of the Russian Federation, it can be concluded that the use of this kind of technical systems will make it possible to more effectively resolve the question of counting the votes and increase the level of confidence in the elections held in the Russian Federation, , And by international observers

Annotation: The article: in the article the grounds of recognition of marriage are invalid; The scientific points of view and jurisprudence on the problems under study are analyzed; Proposals are being formulated to improve family legislation

Annotation: The article: the article explores the legal preconditions for attracting to contractual and extra-contractual liability of the participant-participants the obligations arising from the contract aimed at compensatory rendering of services for transplantation of human organs and tissues

Annotation: The author analyzes experience of preparation of the condemned persons to release, also touches on issues of social maintenance of this category of citizens

Operational experiment and documentation provocation of a bribe or commercial payoff

Questions scientific understanding of the nature and content of investigative situation

Annotation: The article touches upon the problematic aspects of crime investigation, analyze different points of view of scientists-criminalists about the nature and content of investigative situation