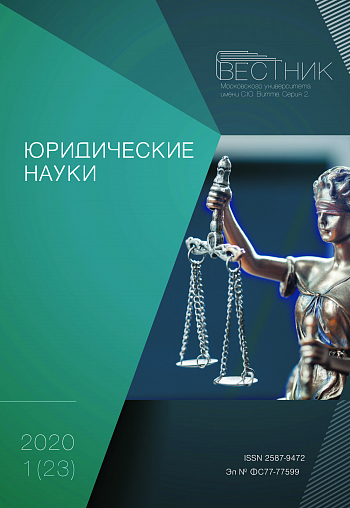 DIGITALIZATION IS A NEW REALITY IN LAW

Annotation: This article is devoted to the study of the features of digitalization as a modern trend (change) in world development, which leads to an increase in the efficiency of the economy, including in the field of education, health, ecology and in General to improve the quality of life of an individual. Ultimately, the introduction of digital technologies should have the positive effect to reduce the number of people below the poverty line, eliminate hunger, ensure good health and well-being of the population, protect the environment, introduce quality education and health care, achieve sustainable economic growth and job growth on a par with decent wages and social justice, as well as solutions to problems related to corruption, the rule of law, violence and mortality. At the same time, the author sees in digitalization not only positive sides, but also possible negative consequences in the form of challenges, risks and threats to the social way of life of the Russian society.

Annotation: For more than 20 years, the problem of adopting a law on normative legal acts has remained unsolvable in the Russian Federation. The purpose of the work is to present the experience of legal regulation in the field of law-making in the member States of the Commonwealth of Independent States. Most of the CIS countries have established the concept and types of normative legal acts at the legislative level, defined the hierarchy of acts and the content of the law-making process. Many States adopted new versions of laws on legal acts in 2016–2018 due to the current trends in Informatization and digitalization of society. The article deals with the system of normative legal acts of three States – the Republic of Belarus, the Republic of Kazakhstan, and the Kyrgyz Republic. The author has studied the approaches of a number of CIS countries to defining the concept of a normative legal act. The significance of this analysis is due to the possibility of using the experience of legislative consolidation of the system of normative legal acts in foreign countries for the Russian Federation.

ON THE DAY TO THE MORAL STATE: WINNER ABOUT THE WORLD FREE STATE

Annotation: The article considers political and legal projects of building a society without a state, ranging from the ideas of utopian socialism to the classics of anarchism. The question of the denial of social utility in the name of freedom by anarchism of the state and the various ways proposed by the revolutionaries to get rid of the state are analyzed. Having been defeated during the years of “military communism” the ideas of a society without a state have found a new embodiment in the doctrine of the Jamahiriya proposed by M. Gaddafi. The need to transform the modern state into a moral state is argued.

THE SPECIAL QUALITIES OF THE RULING MINORITY

Annotation: The article states that hierarchical relations between people are a natural phenomenon. Hence the separation of the ruling elite in society is just as natural and inevitable. Moreover, those in power have a certain set of such personal qualities and character traits that, in fact, allow them to occupy leading positions. Author analyzes in detail these qualities.

ACTUAL PROBLEMS OF SIMPLIFIED PROCEEDINGS IN THE ARBITRATION PROCESS

Annotation: This article will address the most pressing problems of law enforcement in simplified proceedings of the arbitration court, which are caused, for the most part, by the imperfection of the current legislation in this area, in particular, Chapter 29 of the Arbitral Procedure’s code of the Russian Federation, and require close attention from the legislator. First of all, these are such controversial issues as the expediency of setting a 15-day period for filing an objection and evidence; what procedure for notifying the parties is acceptable in simplified proceedings, and what is not; how are the key procedural principles of competition and dispositivity implemented in the framework of a single hearing on a case; and whether the category of cases that the legislator currently refers to the main goals of the simplified procedure – procedural economy. In addition, it is impossible to deny the existence of theoretical problems in simplified arbitration proceedings, for example, in determining the legal nature and essence of simplified proceedings, which is also the purpose of this article.

Annotation: The purpose of this article is to study the corporate and legal aspects of legal support for state support of measures to improve housing conditions of Russian citizens. The relevance of the chosen topic is determined by the need to build and develop the direction of interaction of organizations of all forms of ownership and the state in the most effective implementation of government support measures to improve housing conditions of citizens. Research methods: General dialectical method of scientific knowledge, methods of comparison, analysis, generalization. Main results: we studied the existing measures of state support for Russian citizens in the field of improving housing conditions, the ratio of Federal and regional housing legislation of the Russian Federation. It is concluded that currently the legal support of state support for measures to improve the housing conditions of citizens is complex. In particular, state support is provided not only by the Russian Federation, but also with the involvement of credit organizations and joint-stock companies, such as JSC “DOM.Russian Federation”, with the simultaneous development of a mechanism for compensating the latter for lost income.

PROCEDURE FOR COORDINATING THE LOCATION OF LAND BOUNDARIES

Annotation: The article provides an analysis of the practical difficulties encountered in the land-sharing process; Enforcement issues related to compliance with the established procedure for the harmonization of land boundaries. The subject of the analysis includes the provisions of the current legislation governing the above-mentioned issues, as well as law enforcement, including judicial activities. The author highlights the problems of carrying out the procedure for harmonizing the boundaries of land plots, problems encountered in resolving disputes over the boundaries of land plots, analyses the legal approaches to solving problems developed in accordance with established practice, including judicial ones.

THE SPREAD OF DRUG-RELATED CRIME THROUGH INFORMATION AND TELECOMMUNICATION TECHNOLOGIES

Annotation: The article deals with the relations arising from the sale of narcotic drugs via the Internet. The widespread use in modern life, computer technology and telecommunication systems, creation on their basis networks, which has become an essential part of social relations in all spheres of life, led to the fact that “cyberspace” has been actively used to commit crimes, in particular, for distribution of narcotic drugs and their analogues. The scientific article analyzes the current state of the drug situation in Russia, and outlines the prospects for improving the mechanism for countering the spread of narcotic drugs through the Internet information and telecommunications network. The author analyzes the judicial and investigative practice on this issue, identifies the participants of an organized criminal group involved in the contactless method of selling drugs via the Internet, and identifies the features of each of them. The use of a contactless method of selling narcotic drugs has influenced the widespread use of the cryptocurrency “Bitcoin” as the main means of payment for transactions with narcotic drugs.

Annotation: The article is devoted to prosecutorial supervision of the execution of laws by bodies conducting inquiry and preliminary investigation in criminal cases of corruption-related crimes. The main directions and methods for combating corruption in the framework of prosecutorial supervision were studied. An assessment of the state of supervision, its features and emerging problems is given. In the light of active digitalization, the issue of the impact of the Internet on society as a whole, as well as on the totality of measures aimed at eradicating the corruption component in the activities of various individuals, is considered. The concept of the main subject of activity in the implementation of supervision, its specificity, scope of activity is given. The concept of legal behavior is considered and that affects the choice of each of the participants in the legal relationship. The assessment of the procedural actions of the participants in criminal proceedings. The problems that arise during the implementation of prosecutorial supervision of the enforcement of laws by the bodies conducting the inquiry and preliminary investigation in criminal cases of corruption-related crimes are analyzed.

CRIMINAL LAW BEHAVIOR OF A PERSON: A GENERAL THEORETICAL VIEW

Annotation: The article considers the application as a unique means of protection, one of the guarantees for the realization of the rights of persons involved in criminal proceedings. The main features inherent in the procedural petition are summarized. The purpose and objectives of the procedural petition is disclosed, a list of persons, participants in the legal proceedings authorized for applications of the procedural petition is indicated. The relevance and importance from the point of view of law and investigative ethics indicates the application of the norms of criminal procedure legislation governing the activities and behavior of the investigator related to the procedure for considering and resolving an application. Attention is drawn to the wording “permission to petition”, from which it follows that permission implies certain actions of the investigator to establish facts and circumstances that contribute to the adoption of one of the decisions, namely: to satisfy the petition; or full or partial refusal to satisfy the application. It analyzes the typical errors and violations associated with the activities of law enforcement officials to consider and resolve applications. Based on this, recommendations are made on the preparation of the application.

METHODS OF RECEIPT OF APPEALS IN ORGANS OF OFFICE OF PUBLIC PROSECUTOR, FORMS AND TYPES OF APPEALS