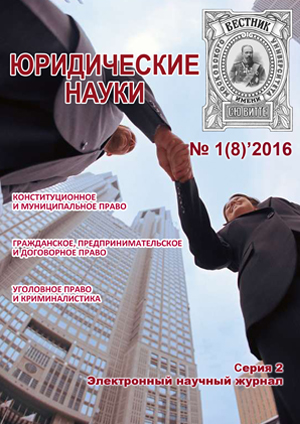 Legal and civilizational grounds interstate integration of the European constitution

Annotation: On the historical necessity of integration of States and the strategic plans of Russia. About the need for a legal basis for international acts. The role of empires and unions of States

Annotation: The need to adapt the Kyrgyzstan its legislation to conformity with the laws and practice of the Eurasian economic Union

Annotation: The main objective of this article – to put the problem of Chinese law in modern Russia's geopolitical conditions. The author has tried on an existing example of Faculty of Law in Harbin to show the success of such scientific research

Annotation: The article considers the problem of separation of the two systems of law in the sphere of legal regulation – private law and public law – in the historical and legal context in comparison with the present era. The conclusion about the need for integration and harmonization of public and private interests, and sources in law

Current status and level of drug-related crimes in Russia

Annotation: The article deals with the problems associated with illegal drug trafficking in Russia. We analyze the legislation of the Russian Federation in the fight against drug trafficking, are the statistics on crimes in the sphere of drug trafficking

Annotation: On the basis of the analysis of the criminal legislation, judicial practice and copyright proposals are considered some of the issues of criminal legal characteristics of counterfeiting

Keywords: criminal law, the theoretical basis of the codification, the punishment of imprisonment, category crimetions, criminal community (criminal organization), smuggling, fraud, the object of the crime

Annotation: The article analyzes the novel criminal legislation, are not relevant to the theoretical foundations of criminal law, the examples of section 6 of article 15, part 3 of article 35 and 210, article 159.1-159.6, article 226.1, 229.1 of the criminal code

Annotation: In article it is told about genesis, development of terrorism during the period from 1994 to 2015 and improvement of the International Legislation, criminal code of Russian Federation and penitentiary legislation of the Russian Federation