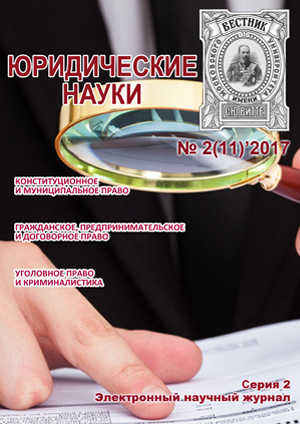 Psychological theory of law l. I. Petrazhickogo, its essence and significance to contemporary legal science

Annotation: The article discusses some of the provisions of the psychological theory of law of L. Petrazhitsky. There are many benefits of this theory, its importance for the development of law in General and American schools

A strong state as a determining factor in social progress (review)

To the question of the far eastern hectar

Annotation: The article: the article analyzes the provisions of the normative act regulating the procedure and peculiarities of granting land plots to the participants of the turnover

Annotation: The constitutional-legal aspect of the nature of freedom of entrepreneurial activity in the Russian Federation and Western countries, in particular, in Great Britain

The state family policy of the Russian federation: status, problems and prospects

Annotation: This article analyses the legal basis for the implementation of State family policy of the Russian Federation

Annotation: The article examines the issues of lighting in the Russian legislation of legal regulation of protection and use of objects of fauna

Annotation: The article explores the specifics and procedure for the division of marital property; The scientific points of view and jurisprudence on the problems under study are analyzed; Specific conclusions are formulated

Executive production of the Russian and foreign experience

Annotation: The article presents a comparative analysis of the development of Executive production in Russia and foreign countries

Annotation: The author makes an attempt to form a system of stimulating regulations in the criminal law subject to the stages of committing a crime and the stages of realization of criminal responsibility

Establishing psychological contact As one of the factors of successful interrogation