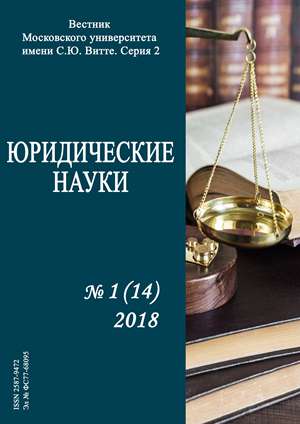 Status and problems of federal relations development in russia

Annotation: The article examines the constitutional and legal foundations of the state system of Russia, analyzes their state, identifies the problems and trends in the development of federal relations.

The formation of the welfare state in modern russia

Annotation: The paper considers the policy of the Russian State in the social sphere. The establishment of the State of conditions for a dignified life and free development of man.

Annotation: The article deals with the problems of local self-government and the ways of its development at the present stage. A large number of activities have been carried out for the development and formation of a regional selfgovernment, but some difficulties have still not been fully resolved.

Annotation: The article presents a brief history of the state policy in the sphere of protection of interests of minors. It is noted that since the beginning of the twentieth century in the country there are lements of the juvenile justice system. After the revolution of 1917 there are several state bodies dealing with minors who monopolized this activity, excluding independent civil society institutions. Shows the structural components of the created system of state authorities of the Russian Federation in the sphere of protection of rights and interests of minors.

Annotation: Within the framework of this article, the specificity of the insurance contract, which is a key legal form of insurance relations in the conditions of modern realities, is explored.

Annotation: In this article we are talking about discussion points that arise in the process of division of property of spouses whose marriage has been dissolved. Analyze judicial practice, the argument in favor of using in such cases the General provisions on the regime of joint property of spouses does not change until it is divided or determine it a share.

Annotation: The article discusses and analyzes the different classifications of alternative dispute resolution. The author identifies the advantages and disadvantages of each of the presented approaches. The author presents his own classification of ADR.

Compensation for unused holiday at dismissal: priority problems of application of the convention of the international labour organization no. 132 on holidays with pay

Annotation: In the article the problems of application of article 127 of the Labour code of the Russian Federation in the part of the payment to the employee monetary compensation for all unused vacation at his dismissal arising after the ratification of the Federal act of 1 July 2010 No. 139-FZ of the Convention on paid leave (Convention No. 132) of the International labour organization.

Annotation: The article is devoted of bribery in states, as to methods of its interrupting. The author the special attention is drawn to the history of arising of bribery in Russia.

Annotation: The article deals withthe legal issues of the psychologist in the realities of modern Russian legislation. On the basis of the analysis of legal aspects of realization of professional psychological help to the population the necessity of improvement of the legislation in the sphere of rendering psychological services is proved.

Some problems of interpretation and application of the article 212.1 of the criminal code of the russian federation

Annotation: The article is devoted to the problems of theoretical comprehension Art. 212. 1 of the Criminal Code of the Russian Federation, as well as difficulties encountered in the course of criminal proceedings related to its application.