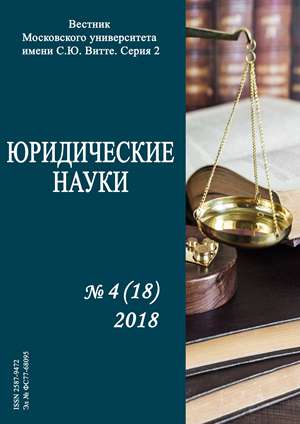 Luhansk and donetsk people’s republics, as well as transnistria, have all the international legal grounds for their diplomatic recognition

Annotation: The article deals with master’s and doctoral dissertations in various branches of science (first of all under state law), in which the author chose certain issues of the legal personality doctrine as a subject of research, and defended in Russian imperial universities during the 19th and early 20th centuries. The main goal of the authors in the analysis of these works was to investigate with the help of the comparative-historical method, as well as formal-logical techniques, the main tasks, content, and the results obtained by pre-revolutionary jurists, who were represented by them in the forms of scientific knowledge. There were a very small number of studies on the subject and that was due to the level of domestic legal science in the XIX century in Russia. Substantiated the continuation of the study of the results of dissertation research on the problems of legal personality in the Soviet and post-Soviet period with the aim of preparing an information base for making historically based law-making government decisions.

Problems of legal liability of students

Annotation: The article analyzes the current state of the problems of students’ legal responsibility.

The problem of conflict of interest in system of public service

Annotation: In this article the authors investigate the problems of such legal phenomenon as a conflict of interest in the system of public service of the Russian Federation, reveals its importance and analyzes the main legal acts regulating this institution. This problem at the present stage of development of public administration is quite relevant and has a significant scientific interest. This is due to the reasons, among which are the consolidation of the principles of the civil service, the foundations of professional ethics of civil servants, as well as the norms of the proper performance of their duties.

Annotation: The article: the article, based on the study of literary sources and analysis of domestic and foreign legislation of different time periods, starting with Roman private law, the stages of development of legal regulation and registration of the transaction are examined.

Marriage ceremony and legal status of spouses in ancient rome

Annotation: The article: the article, on the basis of an analysis of the laws of ancient Rome, the features and order of marriage are examined, and the specificity of the legal status of spouses is analyzed.

Annotation: The article deals with the problematic issues of implementation of the constitutional principle of equality of forms of ownership, as well as the ways of their solution.

Legal essence of the credit agreement

Annotation: The article deals with the peculiarities of regulation of banking activities in the field of consumer lending on the basis of the loan agreement. The existing legal framework in this sphere of activity is analyzed, the legitimacy of interaction between the creditor and the borrower is considered.

Features of criminal responsibility of underage

Annotation: The article is devoted to a comparative legal study of the norms defining the concept and essence of the institute of criminal prosecution in domestic and foreign criminal procedural law in order to clarify its impact on the appointment of criminal proceedings, the procedure for its implementation and the observance of constitutional rights and legal interests of a person and citizen in the implementation of pre-trial proceedings in a criminal case.

Problems of criminal liability for falsification of evidence, under art. 303 of the criminal code

Annotation: The article discusses the problematic aspects of criminal responsibility for falsifying evidence. The criminal law characteristic of the specified crime is given. Formulated proposals for the improvement of legislation in the studied area of relations.

Regularities of the crime mechanism