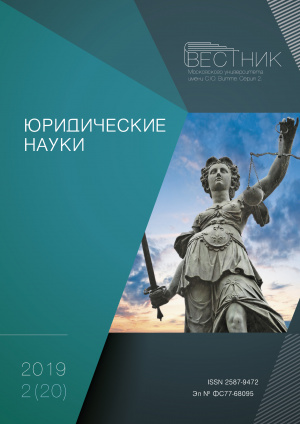 Bases of the constitutional structure of the russian federation: theoretical and legal model, condition and problems

Annotation: This article is devoted to judicial training, the improvement of federal State educational standard. Unconditional necessity of educational activities are justified in the State language, the translation of the Graduate School of education structure in the structure of research training, the need for the right higher legal education in absentia as the first higher education.

Annotation: Discussed the current status of the legal framework regulating national relations. The paper presents normative legal acts that were adopted in the Russian state to regulate interethnic relations, acts aimed at preserving and developing the culture and languages of peoples, protection of the rights of indigenous peoples living in Russia. A separate group of legal acts consists of acts on the rehabilitation of repressed peoples. The author notes that in recent years in the Russian Federation focuses on the adoption of legal acts, regulating the monitoring of interethnic relations and prevention of interethnic conflicts. The author analyzes innovations Strategies of the state national policy of the Russian Federation. The paper specifies the legal basis for the functioning of public authorities, which are responsible for the issues of state national policy. In conclusion, the author makes conclusions and proposals to improve lawmaking and law enforcement in the field of regulation of interethnic relations.

General characteristics of the mentality of russian society

Annotation: An important part of the Russian legal consciousness is the domestic legal mentality, which has a considerable influence on the nature of domestic law, especially its implementation. The ability to understand the specifics of the legal mentality of Russia to a large extent laid the foundations of successful lawmaking, effective activity of the subject of law. Understanding its meaning makes the work of the person who adopts legal norms more purposeful, aware of what goal he should strive for, and what is necessary for this. Ignoring the legal mentality will not allow to properly Express the aspirations of society in the legal law. But here there is a problem-what are these aspirations. It is important that they Express spiritual principles. The legal mentality, as a rule, is in the sphere of spiritual reality, derived from it. For the theory of law, a new type of mentality is important – spiritual and cultural, which expresses, as far as possible, the principles of spirituality in law, develops on the basis of universal and national culture, synthesizes moral-metaphysical and formal-legal principles, etc. Its main aspects: 1) ethical; 2) cultural; 3) philosophical; 4) psychological; 5) religious; 6) sociological; 7) ethnic. Legal mentality is characterized not only by the relevant principles, but also by axioms, which are its mental-psychological, intellectual attributes, without which it can not be spiritually and culturologically developed. They reflect the inner qualities (nature) of justice in its true meaning, are values that largely determine the spiritual state and development of justice.

Problems of improving legislation on education in modern russia

Annotation: Some problems of the legal adjusting of higher legal education are examined in the article. The special attention an author turns on a concept vehicle, that дан in a law in force “About education in Russian Federation”, in that higher education is not named professional, that, in opinion of author, not right. On the basis of legislation about education citizen of Russia, studying in organization of higher education, a profession does not get, and “Jurisprudence” studies to direction. The problem of in absentia legal education that a citizen could get before rises in the article, but presently education on an in absentia form maybe only, if a person gets the second higher and subsequent education, whatever an author agrees with. The constitution of Russian Federation in article 43 gives to each a right to education, and the state supports the different forms of education and self-education. Limit of right on the receipt of higher legal education on an in absentia form, to according to

Annotation: The article is devoted to the consideration of one of the rights of a taxpayer – the right to appeal against acts of tax authorities on bringing to responsibility. The rights of taxpayers are established by the Tax Code of the Russian Federation. The right to appeal against acts of tax authorities enables the taxpayer to protect his rights from unlawful claims of the state. Despite the fact that the position of the taxpayer is not always indisputable, the presumption of taxpayability of the taxpayer is valid in the tax law. That is, the taxpayer is considered right until the return is proved. Legislation has established a two-stage appeal procedure: first to a higher tax authority, and then to a court. As a rule, the higher tax authority supports the decision of the lower tax authority, therefore overpayers have to defend their rights in court. When considering cases in the courts, the task of the courts is both in the proper application of the law and in establishing a balance of public and private interests. In some cases, the tax authorities broadly interpret the provisions of the law, therefore, taxpayers must use all the facilities for their protection.

The civil nature of the concept of “damages”

Annotation: In the article on the basis of the analysis of the existing legal acts, reference judicial practice, as well as scientific sources, the concept of “damages”, which is one of the most important links of the civil conceptual and categorical apparatus, is considered. In the work the author focuses on the debatable nature of the concept under study, it is noted that the success of law enforcement depends largely on the correct understanding of the definitive semantic load of “losses” in the theory of civil law. Based on the evidence, it is concluded that damages are a universal measure of civil liability applicable in both contractual and non-contractual obligations.

Annotation: Currently, the system of the Ministry of internal Affairs of Russia faces a global task – to improve the quality of work in all areas that are within the competence of the Ministry, to optimize the qualitative and quantitative composition of the police, to introduce modern technical and information tools into its practical activities. It is difficult to develop universal criteria for the effectiveness of the police in General, and patrol officers in particular, because their activities are very diverse. Analyzed the legal norms in the organization of the activities of combat units of the patrol service of the police and the Orders of the Ministry of internal Affairs of Russia on the monetary allowance of the police officer, the author came to the conclusion that it is necessary to make additions to the normative legal acts, which should positively affect the efficiency of employees patrulno-sentry duty of police.